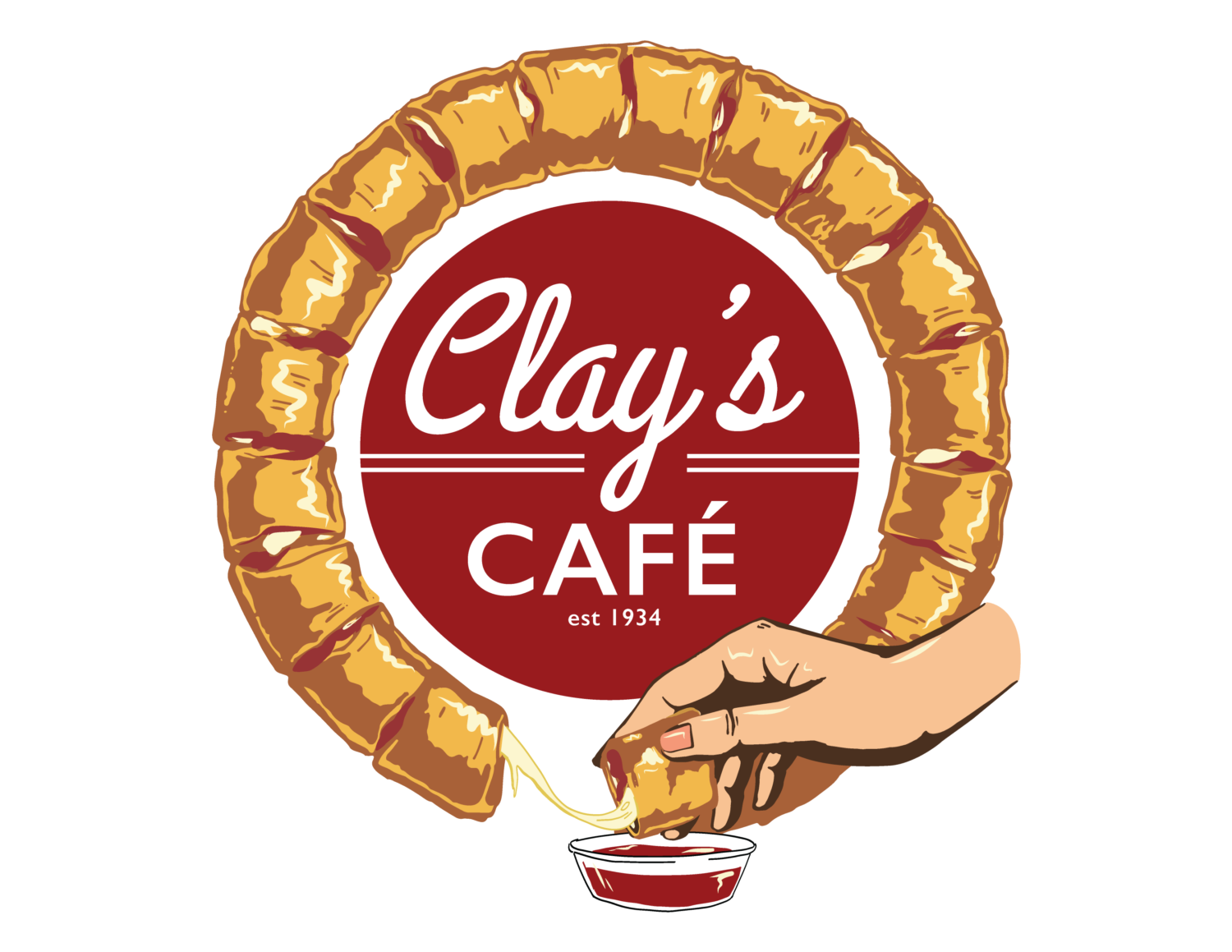 A History of Clay’s Cafe: The Condensed Version

As written by Susan Jones

Earl and Dorothy Cummins were newlyweds in 1935. They started a business making and selling ice cream in a brick building that was located near to where you’re standing today. The house that sits right in front of Clay’s Café was built by Earl and his dad. The Cummins’ lived upstairs and sold ice cream and sandwiches out of the first floor. When the carpet was pulled up some years ago you could see the imprint of the bar stools that once existed. Eventually the Cummins’ moved the business into the now expanded brick building and began to expand their menu. They offered chicken dinners and homemade pies. By 1960, they had added groceries, and strangely enough, a line of home appliances. The restaurant was called “Cummins Ice Cream”.

In 1979, Sherman and Evelyn Clay purchased the property. They re-named the business “County Fair Foods”, and over the years, phased out the grocery line and added more food to their menu. Sherman Clay still made the ice cream with the original equipment.

In the meantime, Sherman and his brother Melvin opened a seasonal French fry stand at the Fairfield County Fair. Together they had developed a method of cooking the fries at a low temperature, cooling them and then cooking them again at a higher temperature to serve them. This creates a truly perfect French fry. During fair week, the stand attracted thousands of people and sold thousands of pounds of potatoes. The stand ran for 50 years. To this day, we cook our fries in the same way. We call them Sherm fries, to remember Sherman and his years of dedication to the business and the humble French fry.

Glenna Clay was the youngest daughter of Sherman and Evelyn. She met her husband Mark Jones on a blind date. New opportunities took them all the way to West Virginia. Mark worked as a grounds keeper at a girl scout camp and Glenna began working at a new pizza shop in town; “The Sandwich Shack”. It turned out that the new owners of the Sandwich Shack didn’t know a whole lot about running a restaurant and quickly offered for Glenna and Mark to purchase the business. The Sandwich Shack was the place where Glenna and Mark’s 3 children, Shawn, Chris and Susan spent their childhood days until 1997.

During the last few years of Mark and Glenna’s stay in West Virginia, Sherman and Evelyn’s health began to decline. It was time to come back to the roots, where it all began. Mark and Glenna wanted to start the business fresh again and changed the name from what was now “Pizza Barn” to “Clay’s Café”. Why Clay? Well not only is that the last name of Sherman and Evelyn but it is also the last name of Kentucky senator Henry Clay, who petitioned the funding for Historic route 40 to be built. Without Route 40, cars would use the interstate to get to and from Columbus. On a Sunday drive, Route 40 brought droves of people through Hebron. Most were travelling to Buckeye Lake state park, a bustling amusement park. The Route is a big reason why Cummins was such a success in the beginning. Naming the restaurant “Clay’s” really pays homage to Henry, as well as Sherman and Evelyn.

Fast forward to today. Gas is looming around $3 a gallon, and good luck finding any car for under $1,000. So much has changed, and we don’t do much the same as we used to. Change is necessary, but you should never forget your roots. We buy our Ice cream from Hershey Creamery, and of course we now have Stromboli which didn’t come into play until 2000. Every day, we’re writing our own history. We’ll not soon forget the flood of 2012 that closed us down for two weeks, or the many employees who touch our hearts and lives while they’re here. As these years fly by, we invite for you to share in our journey and help us write this story for years to come.